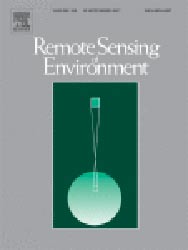 To classify trees along a spectrum of isohydric to anisohydric behavior is a promising new framework for identifying tree species' sensitivities to drought stress, directly related to the vulnerability of carbon uptake of terrestrial ecosystems with increased hydroclimate variability. Trees with isohydric strategies regulate stomatal conductance to maintain stationary leaf water potential, while trees with anisohydric strategies allow leaf water potential to fall, which in the absence of significant hydraulic cavitation will facilitate greater rates of carbon uptake. Despite the recognition of the gas exchange consequences of isohydric and anisohydric strategies for individual tree species, there have been few studies regarding whether isohydric trees produces distinct spectral signatures under drought stress that can be remotely sensed. Here, we examined the capability of four vegetation indices (PRI, NDVI, NDVI705, and EVI) to capture the differences in spectral responses between isohydric and anisohydric trees within a deciduous forest in central Indiana, USA. Both leaf-level spectral measurements and canopy-scale satellite observations were used to compare peak growing-season spectral signatures between a drought and a non-drought year. At the leaf scale, two vegetation indices (NDVI and NDVI705) failed to capture the drought signal or the divergent isohydric/anisohydric behavior. EVI successfully captured the drought signal at both leaf and canopy scales, but failed to capture the divergent behavior between isohydric and anisohydric tree species during the drought. PRI captured both drought signals and divergent isohydric/anisohydric behavior at both leaf and canopy scales once normalized between sunlit (backward direction images) and shaded (forward direction images) portions of canopy, which indicates drought stress and subsequent photosynthetic downregulation are greater in the sunlit portion of canopy. This study presents a significant step forward in our ability to directly mapping emergent isohydricity at different scales based on divergent spectral signatures between sunlit and shaded canopies.