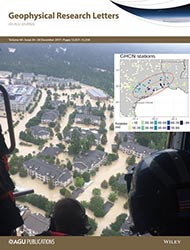 Drought is a common feature of the climate system in the southeastern United States (SEUS), but the synoptic processes that end droughts in the region are poorly understood. Here we examined the spatio-temporal patterns of rapid drought cessation (RDC) during the warm season (April­-November) for three broad storm types: Frontal, Tropical and Airmass during 1979-2013. We found that 73% of all warm-season droughts were ended by RDC events. While the three broad storm type groups ended droughts over similar spatial areas, RDC events associated with closed-low systems covered a greater spatial extent. Tropical cyclones cause RDC during peak warm season (June-September) when water demand is typically maximized from both municipalities and ecosystems. The Frontal storm type had the most frequent RDC events, and is particularly important in both the early and late portions of the warm season. The frequency of RDC from the Frontal storm type, however, has decreased since 1979 concomitant with increases in Northern Hemisphere air temperatures. Projected future warming in the Northern Hemisphere suggests Frontal storms will likely continue to be less important at RDC in the future, potentially increasing drought longevity and influencing the timing and spatial scale of drought cessation.