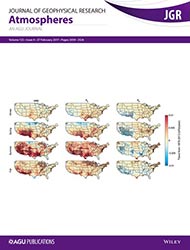 Via air temperature increases and relative humidity changes, climate change will modify vapor pressure deficit (VPD), which is an important determinant of water vapor and CO2exchange between the land surface and atmosphere. VPD is the difference between the water vapor the air can hold at saturation (es) and the actual amount of water vapor (ea). Here we assess changes in VPD, es, and ea in the United States (U.S.) for the recent past (1979–2013) and the future (2065–2099) using gridded, observed climate data and output from general circulation models. Historically, VPD has increased for all seasons, driven by increases in es and declines in ea. The spring, summer, and fall seasons exhibited the largest areal extent of significant increases in VPD, which was largely concentrated in the western and southern portions of the U.S. The changes in VPD stemmed from recent air temperature increases and relative humidity decreases. Projections indicate similar, amplified patterns into the future. For the summer, the general circulation model ensemble median showed a 51% projected increase (quartile range of 39 and 64%) in summer VPD for the U.S., reflecting temperature‐driven increases in es but decreases or minimal changes in relative humidity that promotes negligible changes in ea. Using a simple model for plant hydraulic functioning, we also show that in the absence of stomatal acclimation, future changes in VPD can reduce stomatal conductance by 9–51%, which is a magnitude comparable to the expected decline in stomatal conductance from rising CO2.